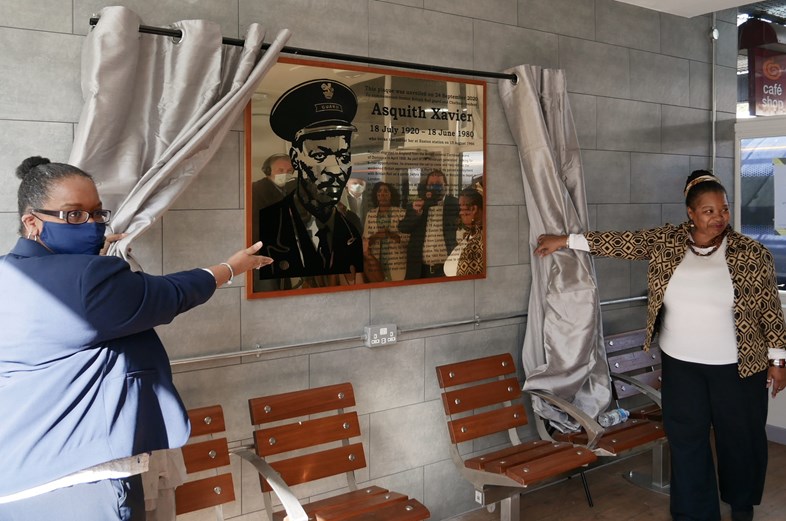 A plaque in honour of Asquith Xavier, the pioneer for black equality who successfully broke the racist ‘colour bar’ at Euston station over 50 years ago, has been unveiled in Chatham Station.

Representatives of Asquith’s family, Southeastern, Network Rail and the RMT trades union were present at the waiting room on platform 1 at Chatham station where the commemorative plaque, funded by all three organisations, was revealed for the first time.

“In the four decades since Asquith’s passing, we have made important progress in securing equality for people in the workplace, but as recent events have highlighted, there is a lot more work to do for society as a whole, which is why Southeastern has fully supported a colleague network for its Black, Asian and Minority Ethnic (BAME) colleagues alongside other network groups in order to make sure we are always listening to our colleagues’ concerns.

“This plaque in Asquith’s memory here at Chatham will be an important reminder of what has been achieved, and in particular Asquith’s own part in that, not just for today’s generation but future generations too.”

“This plaque for Asquith Xavier is a fitting tribute to his efforts in overturning the unofficial colour bar in 1966 and becoming the first black worker employed as a train guard at London Euston station. A plaque already exists at Euston station in his memory and I’m delighted that his hometown of Chatham can now remember his achievement.

“Network Rail is fully committed to being a company where each individual is valued, respected and encouraged to reach their full potential. In keeping with his memory, we’re working hard to ensure our workforce better represents our customers and society as a whole.

“We will continue to make the best use of our people’s talent and capabilities to provide real opportunities for their professional development.”

“Today we remember the brave actions of Asquith Xavier and those National Union of Railwaymen officials such as Jimmy Prendergast who supported him in a campaign which eventually defeated the colour bar at Euston station. We owe so much to those who challenged racism on the railway in an era when it was all pervasive.

“The union remains eternally vigilant in the fight against racism and it is important we remember Asquith Xavier ‎and those trade unionists who blazed a trail for us over five decades ago."

“It is a proud moment for our family that Network Rail and Southeastern Railway have come together to pay a special commendation to Asquith Xavier in honour of his contribution to our multi-cultural society.  We would like to thank all of those involved in facilitating the production of this plaque.”

“It will be a place where we can bring our children to be educated about his pioneering ways and for the general public to learn of a regular man who achieved extraordinary things by speaking out against discriminatory practices, not only for himself but for others.”

The text of the plaque to be unveiled reads as follows:

This plaque was unveiled on 24 September 2020

Asquith migrated to England from the Caribbean island of Dominica in April 1958. As part of the ‘Windrush generation’ looking for better opportunities, he answered the call to come and help rebuild the weakened British economy following World War 2. He gained employment with British Rail as a porter before becoming a guard at Marylebone depot in London.

In 1966, when the freight link at Marylebone depot was closed, he applied for a transfer to London Euston station. Asquith was told that he was denied the job due to an unofficial ‘colour bar’ which operated at the station, excluding black people from working in customer-facing roles.

Dissatisfied with this decision, Asquith successfully campaigned to end the racial discrimination practiced by British Rail, with the support of Jimmy Prendergast, Branch Secretary at the National Union of Railwaymen, and Barbara Castle, the Secretary of State for Transport.

As a result of his hard-fought battle, on 15 August 1966, Asquith became the first non-white guard to be employed at Euston Station, although he received death threats, and had to be assigned a police escort.

In 1972, Asquith and his family moved from London to Chatham, from where he commuted daily by train. Asquith’s courage and moral strength will always be remembered. He defied racial prejudice. His battle changed Great Britain. His fight for justice led to changes to the 1968 Race Relations Act, making it illegal to refuse employment, housing or public services to an individual on the grounds of their race.