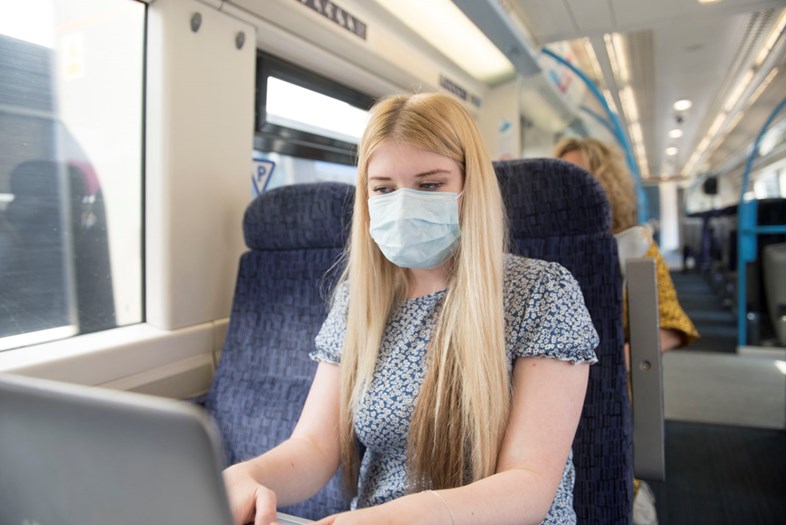 As part of ongoing work by the rail industry to increase passenger confidence and make the railway even safer during the coronavirus pandemic, a new pilot to increase already high observance of face covering rules has led to almost total compliance on trains and at stations.

Rail staff have been working hard to remind people to follow the rules to wear face coverings, before the British Transport Police ultimately enforces the law if someone still refuses to comply. The 8-week trial combines these two roles by pairing a member of railway staff with a BTP officer to patrol stations and trains together. Patrols are taking place on different lines and at all times of the day and week.

Four train operators, Southeastern, Thameslink, Southern and Great Northern have been working with the British Transport Police on the pilot in and around London. Now approaching its final week, the pilot will conclude as increased coronavirus restrictions remain in place across Britain and while key workers, students and school children continue to rely on public transport.

So far, the trial has found that:

“The vast majority of our passengers are doing the right thing by wearing a face covering but we know that those who travel with us expect to see everyone following the rules. We’re really pleased with the results of this pilot of joint patrols, proving how effective we can be in ensuring that the railway is safe for everyone to use and that everyone can travel with confidence.”

“We all need to wear face coverings in stations and on trains unless exempt, to protect those around us. While confirming that the vast majority of our passengers accept that message, this collaboration with the British Transport Police has helped reinforce it among those who needed to be reminded, and the very small minority who perhaps didn’t think it matters.”

Robert Nisbet, Director of Nations and Regions at the Rail Delivery Group, said:

“When face coverings first became mandatory, we thought that the vast majority of people would do the right thing when they travel, and the data now backs that up. We can also see that even for the small number that need reminding, overwhelmingly people will do their part to protect others. We will continue to work closely with BTP to see if this success can be replicated across the country so that more people can travel with confidence.”

“Wearing a face covering whilst travelling has become part of our everyday routine and we are all contributing to stemming the spread of Covid-19 cases nationwide. Wearing one in the vicinity of others significantly reduces the transmission of the disease and saves lives.

“We are pleased that compliance with this law has been high across the rail network, demonstrating that the majority of people are listening and embracing their role in protecting each other by wearing face coverings on trains and in stations.  Our officers will continue to support the rail industry in its efforts to encourage compliance amongst passengers. Anyone who fails to comply without an exemption are being removed from the network and in some cases where appropriate issued with a fixed penalty notice.”

The trial has built on the industry’s ongoing engagement with the public about wearing face coverings and is part of the railway’s ‘Four Es’ strategy for face covering compliance: ‘Engage, Explain, Encourage and Enforce’. Alongside the industry’s Safer Travel Pledge to enhance cleaning, boost space and improve passenger information, it is hoped that learnings from this trial can help increase compliance across the network so that those who need to travel can do so with confidence.

As of 29 October, across the country the British Transport Police have stopped 65,289 people to remind them of the rules, asked 4,353 people to leave the railway and issued 126 fines to those who have not complied. The maximum fine a person can receive for not wearing a face covering is £6,400 in England.