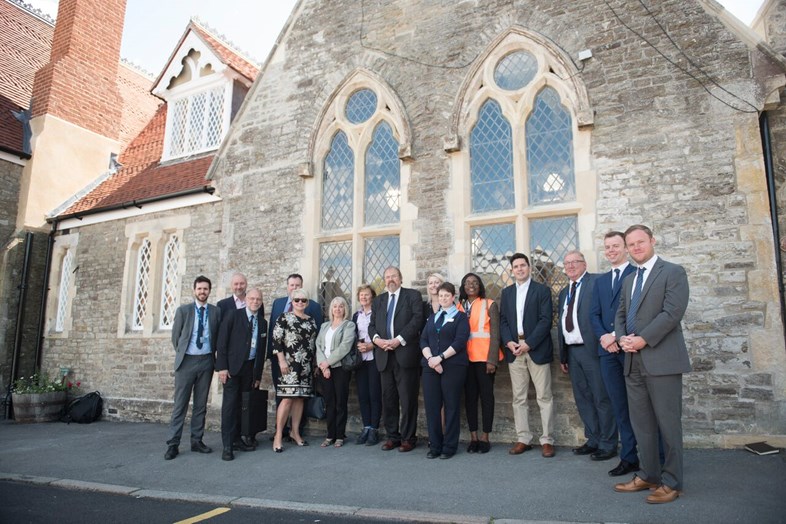 Refurbishment of station given seal of approval by Huw Merriman, MP for Bexhill and Battle

The refurbishment of Battle railway station, considered to be one of the finest buildings of its type in the country, has been given the seal of approval by Huw Merriman, MP for Bexhill and Battle.

Huw Merriman, MP for Bexhill and Battle, said: “The refurbished station at Battle looks fantastic.  It is a significant local building being used by hundreds of people each day and for many others it’s their first impression of the historic town of Battle.  The whole project is a great example of how a number of different organisations can all work well together to enhance the local community and preserve local heritage. The attention to detail involved in restoring it to its original glory is remarkable. It has not only preserved the building but has ensured that it will continue to serve passengers and visitors for generations to come.”

Before refurbishment could get under way on the Grade II listed station, Clague secured planning and listed building consent for structural repairs to the station. Work included replacing the roof and guttering, rebuilding the chimneys, cleaning the brickwork and rehoming a 3,000-strong beehive. Wherever possible, materials were sourced locally, with the replacement tiles hand-made in Wealden clay by a supplier less than miles away.

While the conservation works were being undertaken, a separate programme saw the installation of new bicycle racks for train passengers.

David Statham, Southeastern’s Managing Director, said: “As well as preserving the fabric of an iconic, historic building, this restoration work will enhance the experience of the more than 500,000 passengers who use the station every year and is part of our ongoing programme of investing in improved facilities.

“The new cycle parking spaces are sheltered, well-lit and monitored by CCTV.  In addition, an adjacent real-time customer information screen provides improved information for cyclists arriving at the station.”

Clague also undertook the discharging of the planning conditions which required securing approval for the materials used, including the mortar for the repointing of the Wealden Ragstone, the replacement roof and extensive programme of works.

The consent, secured from Rother District Council by Clague, involved the removal of a structurally unsafe chimney . It was replaced by contractor Redec in brick consistent with the original Victorian building.

James Kenton, Associate at Clague who led on the conservation project, said: “Securing the fabric of this glorious little station was a challenging one in terms of the scale of the conservation required, but also because Southeastern needed to keep the station’s platforms and booking hall open for customers throughout the process.

“Thanks to the combined efforts of Redec, Rother District Council, the team at Southeastern and ourselves, Battle once again has a station it can be proud of.”

Redec Director Chris Moore added: “One of the largest challenges of this project was trying to undertake sensitive conservational repairs to what is a live railway station. The layout of the building made erecting scaffolding problematic and the design had to be revised to take careful consideration of both this and the safety of the passengers below.”

Constructed in 1852, Battle railway station was designed by William Tress, architect to the South Eastern Railway.  Situated on the Hastings line, it is widely considered to be one of the finest Gothic revival stations in the country.  The Grade II listed station is finished in coursed local sandstone and features steeply pitched roofs with decorative tiles and large stepped chimney stacks. The windows, which are glazed with latticed glass are tall and narrow, with pointed arches that typify Gothic architecture.