Haydan gets a surprise Christmas gift from Southeastern 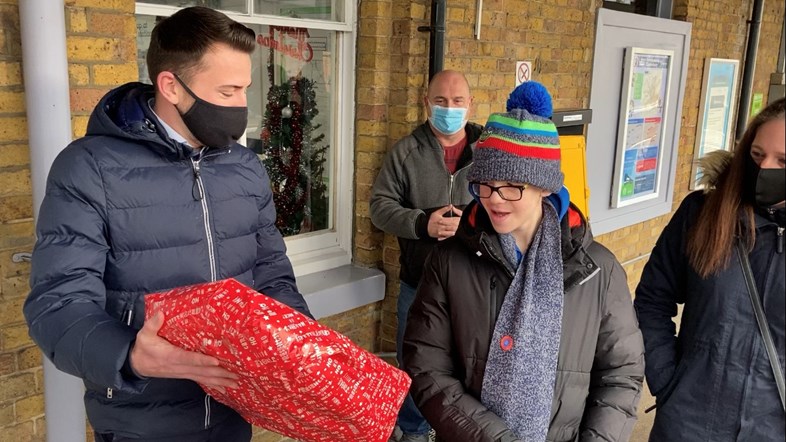 Fourteen-year old Haydan got a festive surprise at Canterbury East station on Wednesday when he was presented with a Southeastern train conductor’s bag as a special treat.

Fourteen-year old Haydan got a festive surprise at Canterbury East station on Wednesday when he was presented with a Southeastern train conductor’s bag as a special treat.

The specialised rucksack, which has wheels and an extendable handle, is identical to those used by Southeastern’s train conductors who work across the network in Kent, East Sussex and south east London.

Haydan, who loves to spend time at stations watching Southeastern’s trains, has had his eye on the bags, ever since he first saw them a few years ago, and when stepdad Markie got in touch, the train company were only too happy to help.

Presenting the conductors’ bag to Haydan - a lucky find among the spares in Southeastern’s stores - Station Manager for Canterbury East, Chris Fagg, said:

“We were only too pleased to be able to grant this extra special request for our of our regular visitors. Haydan loves trains and our railway staff at the Canterbury stations know he’s keeping a keen eye on the comings and goings of our trains whenever he visits, being a big fan of the ‘Traksy’ app which tracks all trains across the national network in real time.”

“This has made a special little boy’s dream come true. Haydan previously had a tour around London Bridge station and thoroughly enjoyed it. He spends every evening at either Chartham or Canterbury East stations, and he’s already the proud owner of a wooden toy high speed train from Southeastern too.”