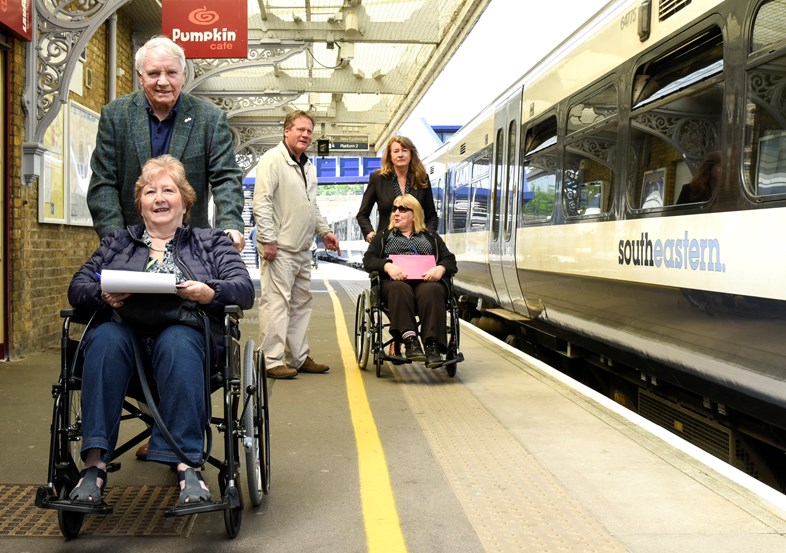 Over 8,000 nominations received from Southeastern passengers, covering 107 stations, in response to government Access for All funding.

Southeastern and Network Rail have together nominated a list of 22 stations to be considered by the government for funding under the Government’s Access for All scheme, in the industry’s next five-year financial period.

The scheme delivers funding for stations without step-free access, enabling the installation of infrastructure improvements such as new lifts and footbridges, making stations easier for people to visit friends, get to the shops or to work.

Accessibility improvements benefit everyone, from people with health conditions or impairments, people with children, heavy luggage or shopping and some older people. Improvement schemes are also good for the economy and mean fewer car journeys, less congestion and lower carbon emissions.

Following a survey, which ran throughout September, attracting over 8,000 responses for 107 stations – the largest exercise of its kind ever undertaken on the railway in south east London, Kent and East Sussex – Southeastern and Network Rail have now put forward a list of stations which they feel have the strongest case for funding.

The Department for Transport will consider the nominations it has received from Southeastern and Network Rail, and other nominations from other operators across the country, together with individual submissions from stakeholders and passengers, before making a final decision on which stations will receive funding under the scheme.

The £300m fund is held by Government, and covers a five year period from April 2019 to March 2024. Southeastern and Network Rail will find out from Government which stations have been successful in April 2019.

“We always want to do more to improve the journey experience for our passengers, and have considered the huge number of nominations submitted for stations to be considered for accessibility improvements. We’ve carefully judged those submissions to make a final list that has now been sent to Government. Factors such as the strength of local feedback and the location of stations in relation to other, step-free stations in the area have all been considered.”

“Ultimately, because it involves spending public money, it is Government that makes the final decision, based in part on Southeastern and Network Rail’s recommendations, and we will find out what the Department for Transport has decided in due course.”

“The Access for All programme is an exciting opportunity for passengers to have an input into nominating their station for this all-inclusive scheme.

“We have worked with Southeastern to identify these stations and this is reflected in our final submission.

“Work at Plumstead, Shortlands and Canterbury East stations will be completed later in 2019. These are in addition to the stations that have already had access for all schemes completed since the government funding was made available. Stations previously nominated but where schemes did not progress for whatever reason, have been included in the current nomination process and will be considered by the DfT again.”

Station nominations submitted to the Department for Transport (in alphabetical order)

Examples of Access for All (AfA) improvements already completed

These stations have already been identified for A4A funding, although the improvement schemes have not yet been delivered. We received an unprecedented number of nominations for these stations, and although they have not been put forward as part of this year’s nominations, they are schemes that were deferred to the 2019-2024 funding period as a result of the review by the chairman of Network Rail, Sir Peter Hendy.

As a result, Southeastern and Network Rail have been reassured that it isn’t necessary to re-nominate these stations, but there is very strong local feeling around these two stations (1,648 nominations for Hither Green, and 563 nominations for Petts Wood), proving that A4A funding is still desperately needed.

Stations that we couldn’t consider

The Department for Transport website lists all nominations for accessible stations. The Accessibility Minister is Nusrat Ghani MP.